One of my goals this year, is to finish up some UFO’s before I start anything new. I pulled out my scrappy bed quilt a few weeks ago and have been making progress on it. You can read part 1 of this quilt here: Scrappy Bed Quilt in Progress. When I put this project away last time, I had the 20 large blocks done and an idea on the sashing. 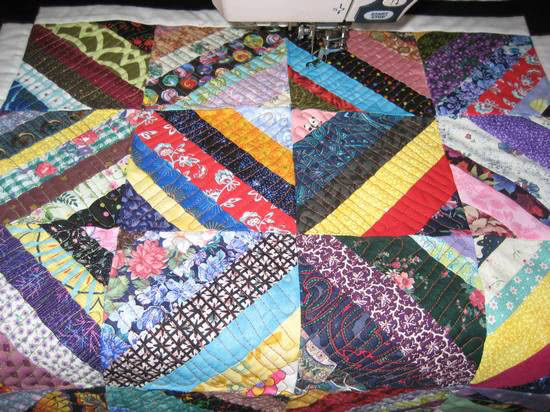 Now, I’ve attached the triple sashings and created the 5 rows. I then spray basted the rows and have started the quilting. This quilt is massive, finishing at 95″x115″. I’ve decided to quilt the rows as a group, then will join the rows together to make the whole quilt. It’s sort of a “quilt as you go” method, but by rows instead of individual blocks.

The top and bottom rows have the triple sashing attached already and the inner white border. The 3 inner rows have just the white sashing and part of the black cornerstone. When I join the rows together, I’ll be using 1.5″ pieces of black sashing (for the front). The backing and batting are already at full size including the outer border for the top and bottom and the side borders that will be added once the quilt is all put together.

I’ve stitched in the ditch all of the sashings and stabilized each row. That took 5 bobbins of Aurifil 50wt thread. As much as I hate to stitch in the ditch, it had to be done. These blocks are wonky, with all the bias edges, even though they’ve been stabilized with the straight of grain sashings.

I debated for several days how to do the quilting. I knew I wanted something fairly dense, but not too complex that it would take forever to complete. I finally decided on diagonal wavy lines that are stitched in the opposite direction of how the blocks were put together.

The sashings are 1″ finished for each colour and even though I’ve already stitched in the ditch each one, I will probably go back and add at least one straight line of stitching down the centre. I might do two lines, 1/4″ from each edge, still deciding. 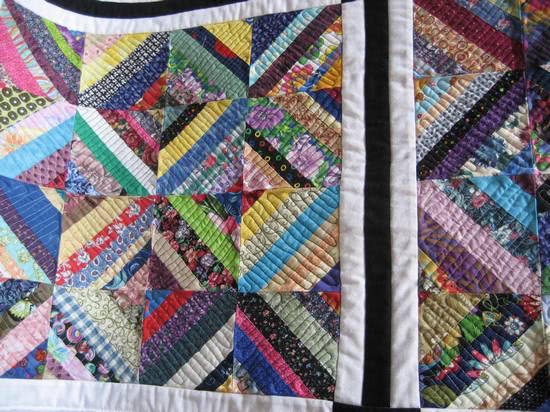 The back is scrappy too. The pieces are joined with 1/2″ finished size black sashing. This will also be the size used on the back to join the rows together. 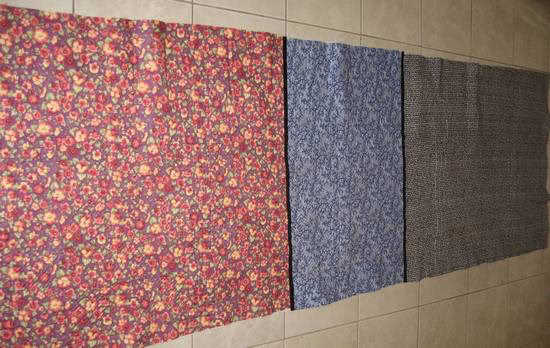 In keeping with the scrappy feel of the quilt, I’m using up older spools of thread and bobbins. When I first started quilting, I’d use the same thread in the bobbin as the top. I don’t do this anymore for heavier threads, so had numerous bobbins that needed to be used up.

I’m using bottomline in the bobbin. I’m not crazy about this thread, so want to use it up. Unlike using Aurifil, I do have to manually adjust my thread tension on the Horizon with this combination of threads.

The threads I’m currently working with: 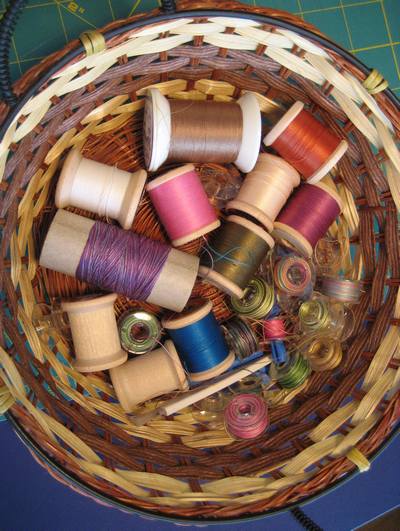 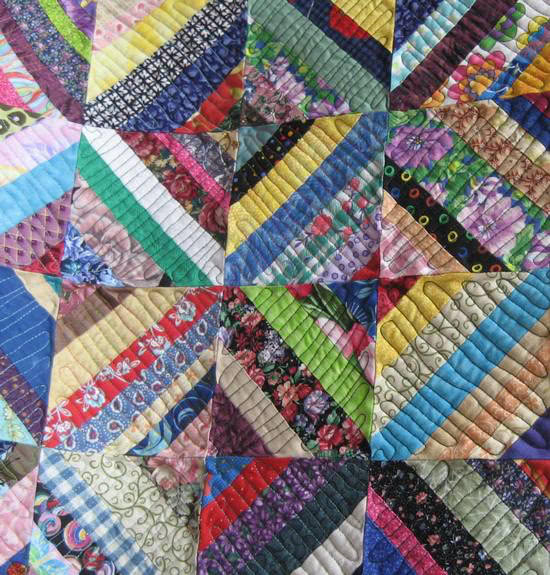 This is the first time I’ve attempted such a huge project and using the quilt as you go method. I hope it all works out. I’ll admit, I was very discouraged yesterday and debated if I should just throw the entire thing in the dumpster and head to Sears to buy a quilt for my bed. Thankfully, today is going much better! LOL

28 thoughts on “More Progress on My Scrappy Bed Quilt”