The apology had an unexpected effect on me.

I remember a time when I attended the University of Manitoba. I was enrolled in a number of courses which included: Aboriginal Peoples of Canada; Introduction to Women’s Studies; Social Psychology; and, Inequalities of Aging. At some point within the duration of these courses I had an epiphany and it was not a positive one. I suddenly came to the cruel realization of my position in society, that I had numerous “knocks” against me.

I saw how my being an Aboriginal female limited my employment options. I was excluded from possibly acquiring a power position within the corporate world for I was at the bottom rung of the corporate ladder below Aboriginal men, Caucasian women, and Caucasian men respectively. The idea of achieving a political leadership role, such as Prime Minister of Canada, was further marginalized simply because of the fact that I was not a white Anglo-Saxon male.

I saw how society’s view of my being an Aboriginal teenage single mother condemned me to a life of systemic dependency destitute of any options. Even members of my community commented that ‘her life was over now’ once they became informed of my pregnancy when I was 17 years old. It is common belief that an Aboriginal teenage mother would not finish her education, lose all incentive to contribute to society, and become dependent on the social system.

I saw how my becoming an aged Métis-Aboriginal female would eventually find me further marginalized. The accumulation of the above mentioned previous knocks would result in a life of low-if-any earned income, with no retirement benefits, and with no guaranteed inherent rights. Non-insured health coverage would be for the privileged. I would not have access to such options as medical equipment or extended help to remain at home. As a result, I would be forced into premature institutionalization, pastured to wait out my remaining days. One could only image the marginalization experienced within the personal care setting. There is a new notion of the provision of elderly-sensitive care. A health care professional who advocates for the adoption of this ideology admitted to me that they have not even begun to look at the needs of the aged Aboriginal clientele.

So, you could see that this was a very grim picture. Gradually however, with further education, self-awareness, and extensive soul searching I came to accept and embrace my uniqueness. I viewed my fate of being born both female and Aboriginal as my strengths. However, something was not right within me. I wondered why I connected with the homeless people. I empathized with them for I saw “them” as living on the edge of society because they were forced to exist there by the non-Aboriginal changes as a result of colonization.

It was during the formal apology that I was able to realize that I connected with “these people” because I also existed on the edge of society. I am a part of them and they are a part of me. And most importantly, I placed myself there because I bought into the notation that I as an Aboriginal person I didn’t matter in this world. For this was the intention of the residential schools and all the other events throughout history. These historic events were meant to ‘wipe out anything native’. Therefore, I embraced this intention as part of my inner truth and grew up feeling like I was less then and I did not understand why. This inner truth existed up until the moment of my recognizing it while listening to the apology. I felt like for the first time, my existence was acknowledged but I think that this was felt on a grander scheme as I think that I felt that, for the first time we as Aboriginal Peoples of Canada were acknowledged as human beings and vital members of Canada.

The heart represents my inner truth.

The butterfly represents the change that has occurred within me for I always felt like there was a limit as to what I could achieve. Fulfilling my destiny would result in recognition of my being (both within me and in society) which would then create disequilibrium within me because of those inner truths I held about myself as an Aboriginal person.

The medallion carried by the butterfly means that I have owned the beautiful part of myself, the teachings of my ancestors. It is a ways from the butterfly because I need to work toward ownership of these teachings as my inner truth so that I can navigate this world as a whole being and fulfill my destiny which the creator has for me. The realization of my position in society, the embracement of my uniqueness, and the ownership of my ancestors’ teachings and knowledge will all contribute to self-determination in all areas of my life.

I believe that with this knowledge I am able to put my own unique stamp onto the world.

Thank you for your creative outlet to share my healing. 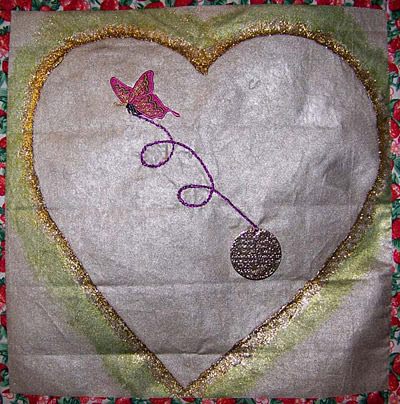