This post is part of the Living Healing Quilt Project that honours the strength, courage, and commitment of Indian Residential School Survivors. This quilt block is from Quilt 3 – Child Prisoners.

This picture represents our grandfather (Raksotha) Kaheroton Daniel Peter Nicholas who was born on April 1, 1901 and raised in Kanehsatake Mohawk Territory, in Quebec. He, and his two brothers, Mackay and Ernest, were sent to Shingwauk Industrial School in the early 1900s. His younger brother, Ernest, died there and was buried at an undisclosed site at Shingwauk; he was 7 years old.

Our grandfather told us stories of his time at Shingwauk. Digging for food in the garbage, working very hard on the farm and academics playing a very small part. When rules were broken, he said students were taken to the basement, tied up to the rafters or pipes and whipped.

He wanted to go back to visit the schools before his death in 1967 but our parents didn’t have the money to go. He would cry a lot when he spoke of Shingwauk. Maybe if we could have taken him back there, our family would now know where his brother was buried.

He was a wonderful Raksotha, who was kind, stubborn and made axe handles and oars on a sawhorse that he made. He would then take them to Lachute, Quebec or Cornwall, Ontario, where he would sell them. He could cook as good as Aksotha Lena Gabriel Nicholas, his wife who also attended Shingwauk. Oddly, their names do not show up on the registry of students but they were all there.

Daniel and Lena had two daughters, Virginia Brown of Akwesasne and Thelma David of Kanehsatake; sadly, their two sons died, one at 9 months old.

This picture is in his memory. 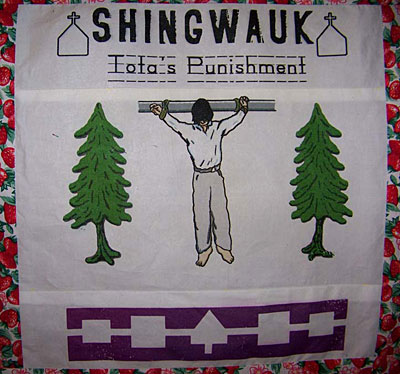