This post is part of the Living Healing Quilt Project that honours the strength, courage, and commitment of Indian Residential School Survivors. This quilt block is from Quilt 3 – Child Prisoners.

This square was quilted by Lugaganowals (Trudy Spiller). I am Gitxsan in British Columbia and I belong to the House of Gwinintxw of the Wolf Clan. I am a member of the Hospital Employees’ Union which is over 60 years old. HEU is the healthcare sector in British Columbia for Canadian Union of Public Employees.

In 1996 a constitutional amendment was adopted at convention to form four equity standing committees: First Nations, Ethnic Diversity, Gays, Bisexual, Lesbians and Transgender and People With Disabilities. I am presently the Chairperson for HEU First Nation standing committee and I also sit on CUPE National Aboriginal Council from our committee. This square is dedicated to all HEU and CUPE Brothers and Sisters that attended residential schools. 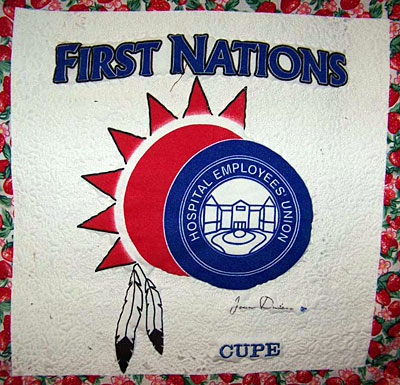