This post is part of the Living Healing Quilt Project that honours the strength, courage, and commitment of Indian Residential School Survivors. This quilt block is from Quilt 1 – Schools of Shame.

This painting speaks of the abuse that took place in the Indian residential schools across Canada. These schools were financed by the federal government and administrated by the church. For decades Native children were brought to these schools in the name of assimilation, and were subjected to various forms of abuse; physical, mental, emotional, and sexual abuse.

I too attended such a school located in Duck Lake, Saskatchewan between 1953 and 1959. During the six long years I spent there, I was continually aware of and often subjected to physical, verbal and emotional abuse at the hands of the nuns and the priests. I was witness to many public beatings and whippings of children who could not or would not adapt to the military-style existence, severed from family and our Native culture for months, if not years, at a time.

Not one of us ever dared speak about the sexual abuse that went on although we all suspected such things were happening. There was a very real fear of reprisal so we kept silent. Besides, who could we tell and who would believe us? Certainly not the priests and the nuns, and certainly not our parents either. Very often, they too had attended and been victims at that very same school as children.

“Preying on the Powerless” depicts the raw and brutal truth of sexual abuse. The pink-skinned torso in the painting represents the non-Native abuser, quite often a member of the clergy or lay personnel who worked at the school as teacher, supervisor or maintenance worker. The abuser hides a religious article behind his back, a cross, which he brandishes as a weapon of authority over his young and powerless victim. The young girl valiantly tries to ward off the advances of her aggressor but her long, skinny arms are no match for his adult muscular strength. Her clenched fist clearly depicts the anger, helplessness and frustration that she is feeling as she tries to escape her abuser. The wolf, whom she hoped would help her, sits leering at her feet. She is totally powerless. 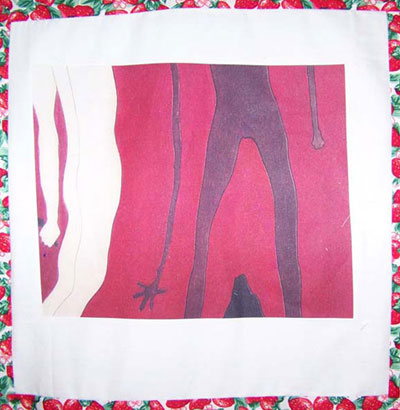 One thought on “Preying on the Powerless, Ena Greyeyes (Blue Jay Woman)”