Please join me in welcoming today’s guest blogger, Heather Spence. She is organizing another Mystery Quilt by Email to raise funds for a little boy named Jack who was diagnosed with a very large brain tumor. I hope you’ll join the mystery quilt, have some fun making new quilting friends around the world, and help a little boy and his family in need. 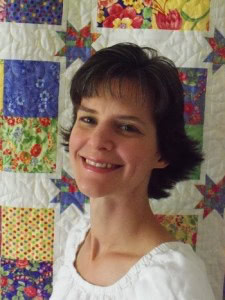 Last year at this time, I was anxiously trying to figure out how to help my mother who has chronic leukemia and was scheduled to undergo a stem cell transplant in November. She needed a full-time caregiver, housecleaning and financial support for housing, transportation and food while undergoing treatment for at least three months. But being a business owner, the mother of two children, wife and general care-taker of our home it was a struggle to find a way that I could help in a meaningful and tangible way on an on-going basis.

And then it hit me. If I ran a fund-raiser it means I can help in ways not possible previously. We frequently use the saying, “Many hands make light work” in our home and it’s an old adage I firmly believe in. 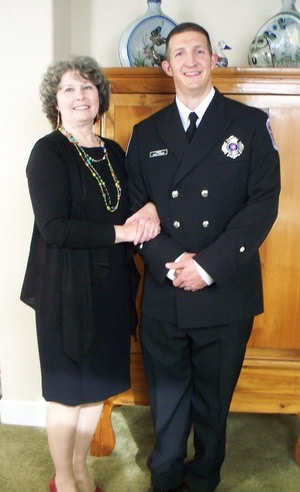 Michele, here at Quilting Gallery, was so kind to feature me as a guest blogger and the response was amazing. 80 quilters helped out and we raised over $800 for my mom. On December 6th she had her transplant, which was successful (currently there’s no sign of her cancer). I saw her for the first time since the end of October on my birthday in February. It was the best birthday present ever to have her walk in the door of my surprise birthday party. (I still cry when I think about it.) It’s never a little thing when we work towards helping others. I really can’t thank you enough for the precious gift you gave my family!! (P.S. The handsome man in the photo is our friend Dan who the first Mystery Quilt is named after. You can learn more about him here.) This picture is of us at my party!! 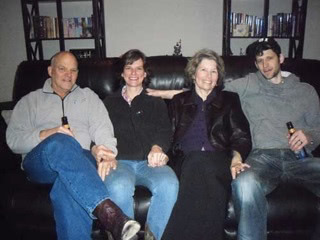 The first Mystery Quilt was the Dan’s Climb quilt pattern. Here are a few pictures of it: 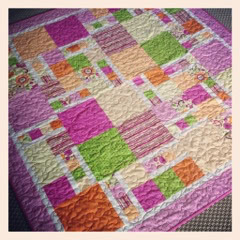 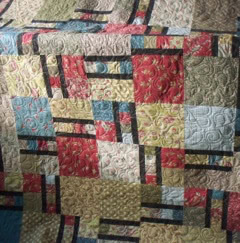 While we were starting that particular quilt, I met a woman named Janice whose daughter-in-law was diagnosed with melanoma which spread to her brain and lungs. She had surgery which removed the tumors but her insurance company didn’t like that she had gone somewhere else to have treatment done and dropped her. As well, the other organization then sent her unpaid bills to collections.

Again, my heart melted. No one that sick should be worrying about their financial situation. They should be focussing on getting better. So in the spring of this year we ran the Mystery Quilt again for Sandee.

Friends…there were over 200 quilters who joined our little group. We raised over $2,000 for her!! It made a difference to her even if we couldn’t relieve the full burden. The good news is she’s outlived her initial prognosis by a year enjoying the time with her twin sons and daughter. 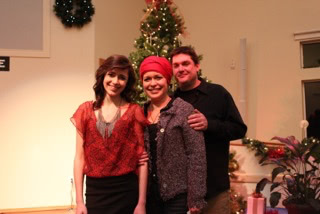 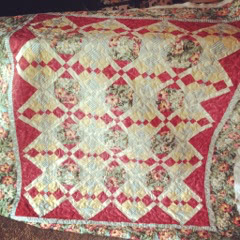 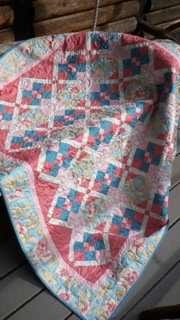 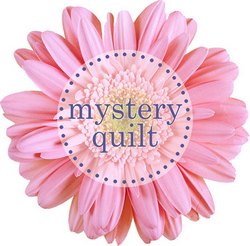 And now, on October 5th, we’re holding our third Mystery Quilt for a little boy named Jack. In March a friend of mine, Gail, posted on Facebook that her grandson was diagnosed with a very large tumor in his brain. They were told that it was located in such a location that they wouldn’t be able to operate. It was devastating news. They were going to watch their little boy die a horribly painful death.

Choosing not accept that, they took him to another doctor for a second opinion and there was a chance that it was operable. The day before his 5th birthday they performed the surgery. It was a long procedure. The photos of him post-op were gut wrenching. And though it was hard to look at them there was hope where hope had not been before. It was successful!

But the recovery has been a challenge. A lot of his motor skills have been impaired greatly. Though he has improved he is still not where he was before the surgery. On top of that there was drainage issues with his brain (I don’t understand a lot of it) and he has to go in for regular MRI’s to monitor those and to check for re-growth.

This new Mystery Quilt is called Jack of Hearts. And my pattern testers have really enjoyed it. They say that it’s easy and fun! Really, when I’ve seen the finished pictures my heart leaps with joy and excitement. Even more so when I know it’ll help him!

To find out more about Jack you can go to his web site: www.helpjack.org. (P.S. I thought I had a picture of Jack but it seems to have gone astray.)

Here’s how the Mystery Quilt works:

The cost is $15 ~ $10 goes to Jack and the other $5 goes to cover fees, printing, and to pay my lovely assistant for all the work she puts into it.

It is done entirely by email! When we receive payment you will semi-immediately (depends on what is going on in my day) get your fabric requirements. As a side note The Fat Quarter Shop is going to be kindly giving all Mystery Quilters 20% off their order.

On October 5th at noon Pacific Standard Time the first clue will arrive in your email. For five more consecutive Fridays at the same time you will get the remaining clues. Each clue is the pattern broken down. It is fully illustrated! The pattern has been tested beforehand…we have made every attempt to catch any mistakes and clarify anything that is unclear.

At the end of the Mystery Quilt, should you keep up with the clues, you will have your very own quilt to keep or give away.

In addition there is a Mystery Quilt group on Facebook. The ladies have a fantastic time sharing photos and comments, receiving encouragement and support. When you sign up you will receive directions on how to join this group.

And (because there’s never too much, right?) we have give-aways for all six weeks! They are cute little bags…so far we have fat quarter bundles from Mill House, Windham Fabrics, large brown quilt totes. There will be patterns, Aurifil threads (thank you, Alex!), and Clothworks is sending us goodies too. We’ve got more requests out but don’t want to get hopes too high.

Two ways (we’re trying to make this as simple as possible): the first is through the Mystery Quilt Facebook page there’s a blue button named ‘My Shop’ under the cover photo. The second is in the Etsy shop.

I’m especially thankful to Michele for the support. The Mystery Quilt wouldn’t be able to touch these lives without her help and we are all deeply grateful.

Thank you and I hope to “meet” you soon!

3 thoughts on “Mystery Quilt by Email, Proceeds for Jack”