Please join me in welcoming today’s guest blogger Patti Lessell as she shares some insights into her own quilting journey.

Well I’m a trier that’s for sure. I never used to be but boy how times have changed. I was diagnosed with Multiple Sclerosis some 20 years ago and found I could no longer work and I hated boredom to the nth degree. So for the next six years I went to University here in England (where I have lived for most of my life) and then finished that and I was bored again.

I found a cross stitch kit in a well known store here in England (John Lewis) and so started my crafting journey. At first I would make things and use fabric for backing or to make a pincushion. Here are a couple of things I made:

I got really disillusioned with stitching and the stitching community in general here in England as it is dying a death. My favorite, and only real local stitching shop, closed and there are no more great charts to be had locally.

Well anyway I became ill again a couple of years ago and decided that quilting was really the way I wanted to move forward. There is a quilting store about 10 miles from where I live and easy to get to and I signed up for a course. I went and bought what I thought I needed including a sewing machine from the quilt show in Birmingham the previous August (this was now October).

The class had 12 pupils in it but after attending a couple of the lessons I wasn’t well again and found it impossible to stand, and as one had to do this in order to see what the teacher was demonstrating, I had to quit. By this time, I had a load of stash and nothing to do with it. It could join my cross stitching stash which was quite large to say the least, ok it’s legendary as is now my quilting stash! I never do things by halves that’s for sure.

Then I found YouTube and all the things I could learn on there. There were loads of different videos on there for quilting but everything was quite short and there I discovered that I was really good at the theory of all this stuff but not that great in actually cutting and completing anything. The ultimate I found was Craftsy where there are more lessons as well as longer classes where a project went from start to finish in a single lesson. The major thing really is in the cutting, so I have a zillion different rulers and I’m still trying, as all the photos will attest, to but I am finally finding out what kind of quilting I prefer and am reasonably good at, not great but I can only get better. 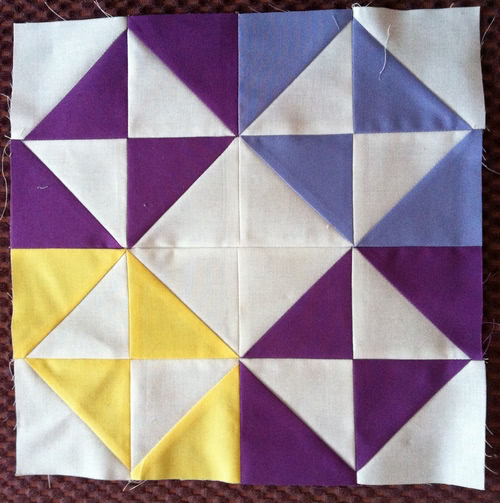 So I thought I’d cracked it. Had I heck!! The next thing I decided to make was a cushion for my 9 year old granddaughter Lily and this is it so far: 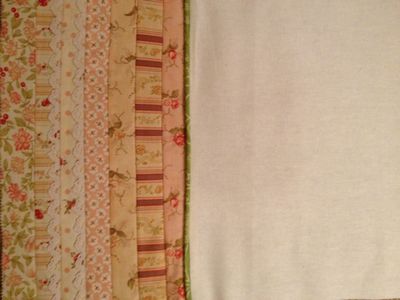 I was very proud of myself here. I managed to make the cording and do everything as instructed. All I’m waiting for now is the cushion to fill it. It’s kinda cute and I really like it.

Well my last effort was today, after I managed (with help) to get my machine working again. It failed on me yesterday and all I had to do was rethread it and put in the bobbin again and voila this is what I started: 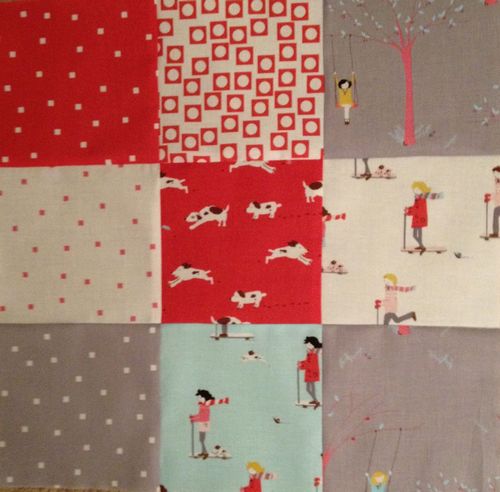 This is a 9-patch that I am going to make a load more of and make into a disappearing 9 patch quilt for my (ok our) latest grandchild Chloe (4 months).

For somebody (me) who has never been a trier in her whole entire life I am really proud of me for sticking at this so doggedly. Today I learned that I really ought to walk before I try running.

I did try paper piecing, not just any paper piecing but that little (and I mean little) apple that Charise has made a paper pieced pattern for. In the garbage again. See I told you – I have to learn to walk first, and as we are having a lesson on paper piecing on Sunday at the London Modern Quilting Guild, I figured before I ruined yet more fabric that maybe I ought to leave it until I am shown how to do it properly.

I have a few blogs and on my quilting blog (I think) I grabbed a British guy’s attention who is living in the States. I always sign my emails and blogs with American by birth and MOUTH but British in every other way, and this caught his attention.

Anyway to cut a long story sideways, the guy’s name is Giles and through having diabetes and not taking care of himself over the years (he is only 40 now), amongst other disabilities, he has lost most of his eyesight and is legally blind but wanted to quilt in the worst way. He has made one quilt and won third prize for it (I would love his third prize – it is a box full of Aurifil Threads). And this is it with the reverse showing as well:

But Giles (he has a blog too here) was finding it really difficult to quilt and I had a brainwave (look these don’t happen to me very often – in fact never before) and suddenly remembered about a ruler set I had seen that I thought would be perfect for him. So I wrote to the company, which is called Guidelines4Quilting, at both their email addresses they had listed and John wrote back asking for Giles’ snail mail address, which I gave him of course, and he sent Giles the ruler and one of the add-ons and then emailed Giles to find out if it worked out okay, which it most certainly did, and then sent him the rest of the kit.

You can buy any combination including their ruler or not. I purchased the smaller of their sets because I figured if it could help a blind man than surely it could help me. But I really should have bought the larger set and really regret that now but shall rectify it in the near future.

I do hope you have enjoyed my stint as a Guest Blogger here and here’s hoping I get much better at this quilting because I am definitely not giving up so watch this space for hopefully more, and better, adventures in my foray into quilting.

3 thoughts on “Guest Blogger: My Journey (so far) into Quilting”