Please join me in welcoming today’s guest blogger John Jones as he shares the making of The Fabulous Quilt. It’s an amazing work of art created with panels from 254 participants.

The quilt panels were created spontaneously & coloured with fabric marker pens on calico by family, friends, neighbours, people in the local shops and community, my favourite bars, visitors to workshops & exhibitions over the last two years and random people that came into my life.

Calico was chosen for the background, being the nearest to a “blank canvas” that could be found, the fabric pens gave a wonderful choice of colour and worked well on the surface. They become dye fast when ironed. 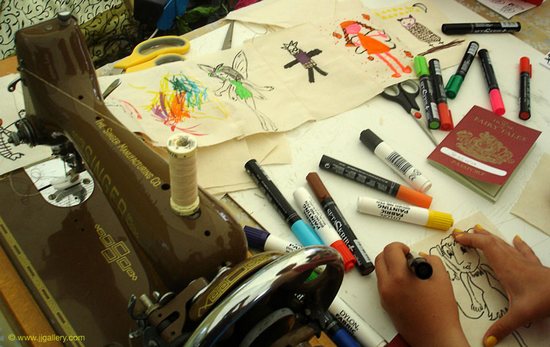 The first panels were created at home as an experiment and the quilt was continued by visitors to a workshop I did with the House of Fairy Tales/ National Trust, Clumber Park, Nottingham, August 2009. HoFT, best described as a travelling arts circus, was founded by Gavin Turk and Deborah Curtis. The quilt began to grow outside, in a field, by a lake in one of the most beautiful parts of the Country.

I asked everyone to draw whatever came into their mind that was fabulous, magical or both.

A quilt panel from stitched forest leaves was also created at this workshop. That is another story.

The Fabulous Quilt continued to grow on its return to the North London woodlands with family, friends, neighbours and visitors adding panels to what had now become a visitors’ book draped over the sofa. It was also taken to lunches, parties, birthday picnics, Highgate Woods, and the panels created documented these gatherings. 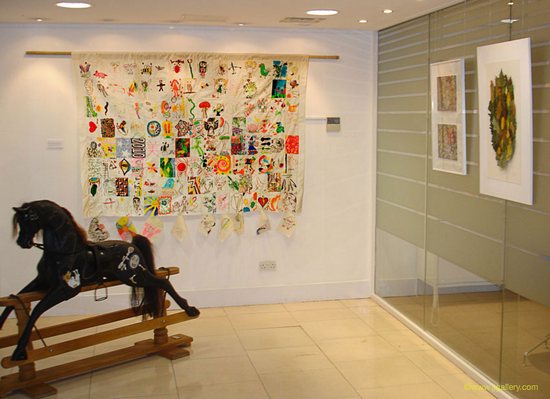 It was the visitors’ book at “Patchwork” Reading Room Gallery, Frith Street, Soho, London September 2010 and the panels were added to the quilt during the exhibition. Many thanks to everyone to came to the show and to the Reading Room for their support.

Each panel created, with what came immediately to mind, is a postcard from people’s imagination and like a dream catcher they were collected at random from neighbours, locals shops, cinema, restaurants, bars and people in the street to finish the quilt. Collecting all the panels took over 18 months and was the most time consuming part of making the quilt but it has grown to be an amazingly beautiful and powerful piece.

254 people form the creative group. Some wanted to do more than one panel (266 in all). The age range is 6 weeks old to 85 years. Most everyone engaged immediately with a sense of fun, some adults found it difficult to overcome their inhibition as they hadn’t been “allowed” to draw and paint for a long time. Some found their inhibition too much to overcome. The free hugs in Soho Square were a pleasant surprise and encouragement. 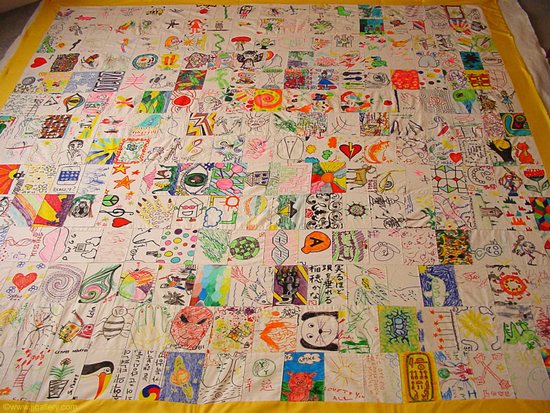 The Fabulous Quilt was literally made “on the hoof”, the panels were joined and top stitched as the quilt grew. This helped hold it all together and keep it flat as it wasn’t possible to iron the seams open in the middle of fields, streets, bars and shops. It was stretched out on the bedroom floor to baste the batting and cotton lawn back in place. 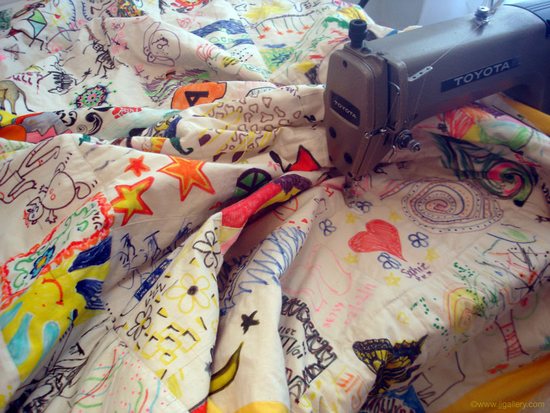 It was quilted with simple straight machine stitch around each panel through the layers and the yellow border was finished by hand sewing around the edges. 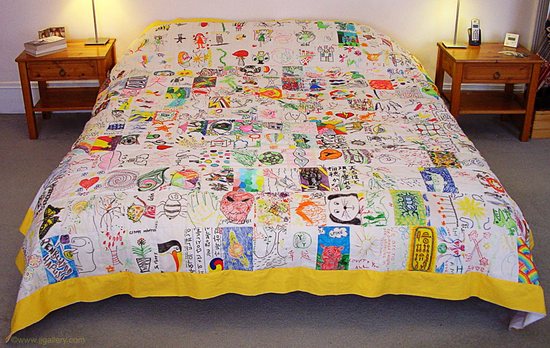 The Fabulous Quilt by John Jones

8 thoughts on “The Fabulous Quilt by John Jones”