Please join me in welcoming guest blogger Linda Winters as a she shares with us her quilting journey. Thanks for being a guest, Linda. 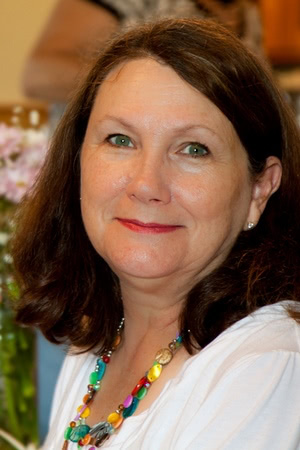 Hi, everyone! My name is Linda Winters and I’m living in Texas again after being away for twenty years. I grew up in the colorful city of San Antonio, where Fiesta parades and colorful celebrations made an indelible impact on my tastes. To this day, I have a very difficult time working with soft, muted colors although I often admire them in the work of others.

I have been interested in quilts and quilting since I was a very small girl. My grandmother made a Little Dutch girl quilt that I found fascinating. Every little Dutch girl had a different print dress and her little socks were tinted (probably with crayons) to match! I thought that was just the most wonderful thing! Quilting, though, was on the decline during those years so I didn’t learn to quilt until I was grown. I did learn to sew, though, and as a teenager and young adult I made my own clothes.

I started college with the intention of majoring in art, but was persuaded by my counselor to minor in art and major in education, since that was what most women were encouraged to do in the early nineteen seventies. (Being a compliant type person, I did just that.) I found that my creativity really helped to make me a better teacher, so I didn’t regret that decision. I taught elementary school for twenty years.

When expecting my first son, I was part of a group of women at church who met for the purpose of sewing for others. We made quilts for a children’s home and knit slippers for local nursing homes. I have very warm memories of sitting at a quilting frame with women in their eighties and attempting to “quilt” with them. (I wouldn’t be surprised if they had to remove my stitches after I left, but they certainly never let me know about it if they did!) The pieced tops we worked on were beautiful and the stories from their lives were fascinating to a young mother-to-be. From then on, trips to the library nearly always included perusing the needlework aisle and bring home at least a couple of books about quilting.

It was when my granddaughter was born that I started quilting in earnest. I lived in Athens, Georgia at the time. Athens is a very diverse little town because of the presence of the University of Georgia. I bought some “how to” quilting books and dove in! My first quilt was a queen sized Grandmother’s Fan with a fancy pieced scalloped border! I had no idea it was not a good project for a beginner. I even hand quilted it, although my stitches were BIG! That quilt is now in our motor home, where only family can see it! I tried another pieced quilt, but this time I added some appliqué that I had designed. It won second place in the beginner category of the local guild quilt show. I had found a way to be creative, so I was hooked from then on. Athens has a great quilt guild called The Cotton Patch Quilt Guild. Those ladies gave me encouragement and confidence when I needed it most. I never heard anyone say anything negative about another person’s big stitches or poor color choices. Every lady who brought in her work to show left feeling validated as a quilter.

After living in Georgia long enough for our three sons to grow up and move on, we moved to Raleigh, North Carolina. This is another great area for quilters. The guild there was HUGE! Big name speakers were brought in for programs. Many of the members there were well known and published in the quilt world. We were only there for two years, but I was encouraged to believe that I could publish my patterns. It was when we moved back to Texas that my sister gave me the push I needed to actually do that. (Thank you, Darla!) 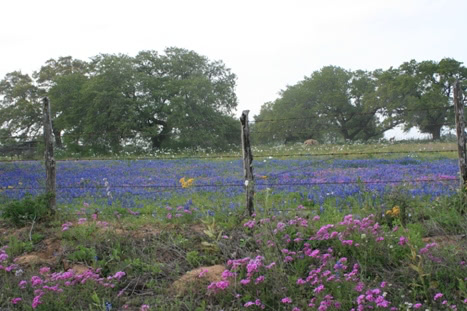 I live with my wonderful scientist husband (of forty years) only thirty minutes from the Alamo and the San Antonio Riverwalk. We are in a small farm and ranch community where the main “industry” is oil, cotton, peanuts, and cattle. I can hear coyotes howl at night and I can see Longhorns and other cattle grazing in nearby fields. It’s not unusual to see people riding horses along the side of the road. It can be one hundred degrees in the summer, but Fall, Winter, and Spring make up for it by giving us glorious, sunny days with cool (not cold) temperatures.

I spend my days designing quilts, turning them into patterns, delivering them to a couple of area quilt shops, writing my blog, and sometimes teaching classes. (I fill in any idle time baking or gardening!) Most of my quilts are inspired by childhood themes like fairy tales and nursery rhymes. They are mostly appliqué done with a very easy, freezer paper method. I quilt every chance I get with my granddaughter, who just turned eight, and lives way too far away! She has made three small quilts so far! My three year old grandson was happy to have a Superman fat quarter that he wore as a cape. 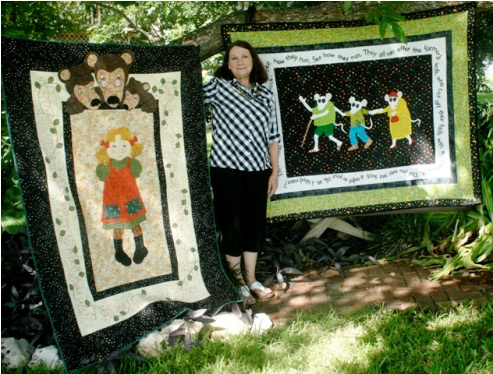 I invite you to check out my blog and my website. I would love to hear your comments. I try to keep my blog as visual as possible for those of us who learn best from pictures. After all, I had a second grader once tell me, “Actions speak louder than verbs!” I agree with him.