Please join me in welcoming guest blogger Angela Magnan as she shares her quilting journey with us. Plus, check below for a "HOT" give-away from Angela. Angela doesn’t have a blog yet, but you can email her. Thanks Angela for being a guest here at the Quilting Gallery.

Thank you so much for allowing me to guest blog. My name is Angela Magnan, I’m 31, and I’ve been quilting for about ten years. I started the hobby shortly after my mother did. She began quilting after being inspired by her mother-in-law, my grandmother, who everyone knew as Memere. My mother and Memere had long-shared a passion for buying and selling antiques, setting up at the same antique shows, and going to auctions together. When Memere starting making a Joann Block of the Month quilt, my mother was inspired by the fact that she wouldn’t have to cut any pieces. It was only a matter of time before my mother would overcome her fear of cutting and catch the quilting bug for good. And then she gave the bug to me!

Each of the three of us developed our own style. Memere was a pattern quilter and always quilted by hand. My mother also usually follows a pattern, prefers piecing and rarely does appliqué, and sometimes quilts by hand and sometimes by machine. She occasionally steps outside of her comfort zone and chooses fabrics or patterns that are a bit funkier than her normally conservative self.

I have my own style. I studied biochemistry as an undergraduate and was drawn to the mathematical and logistical side of quilting. More recently, I completed a Master’s degree in nonfiction writing, so naturally I am drawn to story quilts. A few years ago, I modified a pattern to design a quilt based on my trip to Rocky Mountain National Park (for which I’m still deciding on fabrics), and currently I am designing a quilt based on my ten day writing conference in Bar Harbor, Maine (for which I have the fabrics, but am undecided on the layout).

I enjoyed viewing the story quilts and reading the stories posted for last week’s contest. They represent well that the term "story quilt" has a rather broad definition. In essence, any quilt can be a story quilt as long as it has some unique characteristic that makes it different from other quilts. In some ways, all quilts are story quilts in that they are built in the same way as a story. You gather all the pieces and try to arrange them in the best possible way. And sometimes, just like writing a story, the unplanned or the unexpected results in a more powerful presentation than what you had originally planned.

My mother recently finished a hand-quilted Civil War quilt using all reproduction fabrics, most of which she bought in Maryland, Pennsylvania and Virginia, when she was down visiting me from Vermont. To make the quilt extra special she quilted the names of my two great-great-great grandfathers who were in the Civil War into the border on the top and the bottom. On one side, she quilted Grand Army of the Potomac and on the other she quilted The First Vermont Brigade. (Unfortunately, you can’t see the quilting in the photo.)

Another quilt I have is a Joann Block of the Month quilt that Memere had started making for me. She had been making a quilt for each of her granddaughters, originally as wedding presents. After Memere died, I inherited the quilt, unfinished. The other night, I joked with my mother that maybe I shouldn’t finish it until I get married. She responded by saying that maybe if I finish it, then I’ll get married. 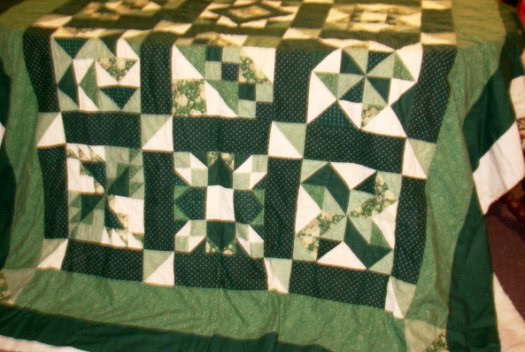 I have yet to finish it, but in 2008, I made this story quilt for someone else’s wedding. It is the first quilt I have ever actually finished. Two friends of mine, Jeff and Lisa, both moved to Vermont from out of state, met there, and spent several years there together before moving to South Carolina. The quilt is the story of their life in Vermont. 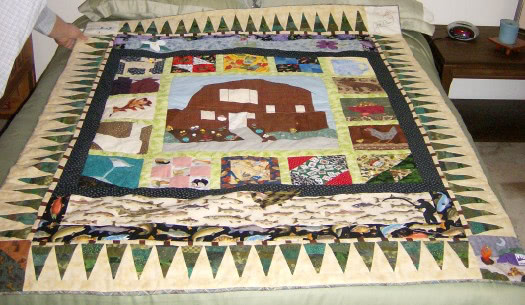 The center block is paper-pieced and based on the house they lived in together, and where I also lived for part of the time. Their house was an odd shape, which made it necessary to design it myself. Each block surrounding the house, as well as the top and bottom frames, and each of the four corners, represents some aspect of their life in Vermont: their yellow lab Marleybone, the moose Jeff hunted, the chickens and geese they raised, the Martinis they often enjoyed (particularly when Lisa’s dad was in town), the pottery mug Lisa had made. In some of the blocks, the fabric is what tells the story: the sushi from their favorite local establishment, the cards we often stayed up late playing, the tomatoes and peppers they grew in their garden, and the hot sauce that Jeff put into and on everything. Jeff gave me a bundle of quilting fabric for Christmas one year, and each of those made it into the quilt somewhere as well. One of the corner blocks is perhaps my favorite block: it is a tent made from the chest insignia from one of my T-shirts that I wore when I worked at the state park job where we had all met.

When I started planning this quilt, I knew that I wanted the house to be the center of the quilt, and I merely had a list of possible blocks to surround it. I took this list with me when fabric shopping. Some blocks never happened because I couldn’t find appropriate fabric. Some blocks emerged because I found a perfectly appropriate fabric that I never expected to find, such as the sushi and the hot sauce. So the quilt planning process was a back and forth affair between my ideas and my fabric choices and how they melded together. Some of the surrounding blocks came from patterns I found in books, such as the dog, the chickens and the tree border. Others, I designed myself, such as the house and the martini glass. Finding all the fabrics I needed was the most time-consuming aspect of this quilt. Other than making decisions, which for me is always the hardest part of making a quilt, scaling the patterns to size was probably the most difficult aspect.

What I love about this quilt is that it includes so many different quilting techniques, regular piecing, paper-piecing, appliqué, embroidery, and embellishment. Additionally, you can do anything you want. There are no limits, and although it can be more challenging, it stays interesting because every block is different. One downfall, or maybe a bonus, is that you only use a little bit of each fabric, so you end up with a lot of fabric left over, some of which you may not have any further use for. Hot sauce, anyone? 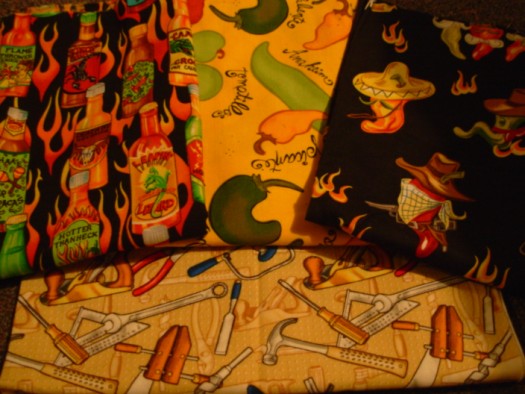 How would you use these fabrics? (If you post within the next two weeks, and I like your idea the best, I will send the winner a packet of the above fabrics, approximately 1/8 to ¼ yard of each.)

And feel free to ask questions and I will try to answer them.

To enter the give-away, please leave a comment below with your idea(s) on how to use the fabrics pictured above. Angela will choose the winner July 7th.

Give-away now closed. Congratulations to #5 Garilyn for winning the pretty fabrics and thanks to Angela for the give-away.

21 thoughts on “Meet quilter Angela Magnan, and a “HOT” give-away”