This was the scene the other night around midnight. Both of my boys sleeping soundly in the often fought over chair. I guess they were too tired to fight anymore and decided sleeping together wasn’t so bad after all. 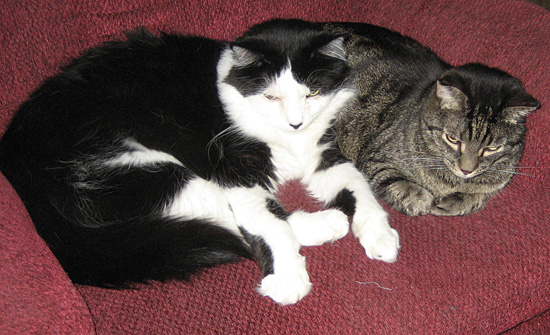 The black and white one is Slade and the brown tabby is Daniel. Daniel is 10 and has been with me for 8 years. He was rescued from the streets by some kind folks in the small town where my parents live and then given to me.

Slade has been with me for 2.5 years and came from a local family up here after being rescued from the cold weather. He’s around 7, but a little harder to say for sure as his health isn’t the best. He was obviously abused and it took a good year before he’d even come out of hiding when friends came over to visit.

Daniel is a momma’s boy. He’s almost always near me, and if I sit to watch TV he’s on my lap even when I don’t want him to be. He’ll often come sit beside me as I work or stitch and demand to be picked up. He’s still very playful, loves toys and the laser pen.

Slade would be happiest if I went to bed by 9:30 and got up at 6:00 each morning. Late at night, he’s often in the bedroom meowing for me to come to bed. He’s still skittish and scares easily. He adores Daniel and always wants to cuddle with him or be close by. Daniel could care less. He loves his Aunties Julia and Linda best. 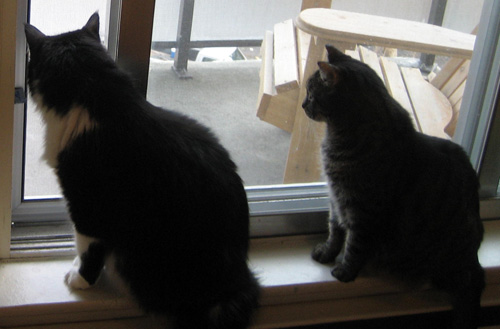 I’m not sure that alpha male is as important to cats as it is to dogs, but Daniel still has the upper hand even tho Slade far outweighs him. I’ve been expecting the power to shift, but I’m not sure it’ll happen as Daniel is too easy going to really care.

5 thoughts on “Fabric Testers: My Boys”