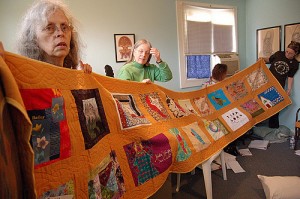 The Safe Motherhood Quilt Project is a national effort developed to draw public attention to the current maternal death rates, as well as to the gross under-reporting of maternal deaths in the United States, and to honor those women who have died of pregnancy-related causes since 1982.

The quilt is made up of individually designed squares; each one designed and dedicated to one mother’s memory, and may mention the date and place of death and the name of the woman. The Safe Motherhood Quilt is the voice for women who can no longer speak for themselves.

Did any one person or event inspire the creation of the charity quilt group/organization?

The Project is the vision of Ina May Gaskin, midwifery pioneer and author of Ina May’s Guide to Childbirth and the classic Spiritual Midwifery, who has been instrumental in bringing this issue to the public light.

Geographic location of your organization or group.

The women honored on The Safe Motherhood Quilt have all died in the United States, but quilters can contribute from all over the world.

How many charity quilts have been donated?

So far there are 9 panels with 20 squares each on them that have been completed. Ina May Gaskin expects that once the mainstream media catches wind of the project, that she will be inundated with names of lost mothers needing to be honored. We are always in need of quilting volunteers.

Are there any special yearly events, such as a quilt-a-thon?

We have just begun work on a very special quilt, honoring the large number of women who have died of a single complication: Amniotic Fluid Embolism. Click for more information about these particular women and how you might volunteer to make a square.

How many volunteers are involved?

Over the last few years there have been several quilters involved. Volunteers are needed to create squares and to help with assembly and quilting. Most importantly, if you know of a woman who should be honored on The Safe Motherhood Quilt, please contact laura@kangaroopromotions.net.

How can one volunteer, donate or get involved?

Each of these women has a story. Please read it. If you would like to create a square in honor of one of them, please email me or post a comment on this thread. Together we can begin to raise visual awareness that women are dying unnecessarily, right here in our American hospitals.

Ina May hopes that this project will receive the national media attention it truly deserves very soon. When this happens, she expects to be overwhelmed with names of mothers, sisters, aunts, and daughters who have died giving birth in this country. She will need quilters to help commemorate these women and educate our nation about this dangerous trend.

Please email laura@kangaroopromotions.net if you would like to create a square for The Safe Motherhood Quilt Project, or would like your name added to a list of quilters that we may contact for help in the future.

Did you know…that the Centers for Disease Control estimated in 1998 that the US maternal death rate is actually 1.3 to three times that reported in vital statistics records because of underreporting of such deaths.

Did you know…that reporting of maternal deaths in the United States is done via an honor system. There are no statutes providing for penalties for misreporting or failing to report maternal deaths.

Did you know…that the Centers for Disease Control estimates that more than half of the reported maternal deaths in the United States could have been prevented by early diagnosis and treatment.