It’s time for some quilting fun this Fall. Over 12 weeks, 36 designers will create blocks for the Celebrate Christmas quilt-along. These blocks will be featured, 3 per week, on the Quilting Gallery site starting September 13th. In addition to the blocks, there will be Super Deals for Quilters from our favourite online retailers.

Upload your Blocks to Flickr to WIN some Buttons!

Incomparable Buttons have donated 36 buttons cards to be awarded to quilt-along participants.

Here’s how it works. You’ll have two weeks from when a quilt-along block has been published to make the block then upload it to our Flickr group. The staff at Button Mad – Incomparable Buttons will be reviewing the photos and choosing one winner for each of our blocks. Winners will be contacted via Flickr mail from Button Mad. Super simple!

Please share the logo below on your own blog. 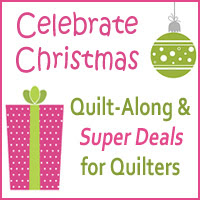