Please join me in welcoming today’s guest blogger, Beth Donaldson. Find out how her quilting career led to her being a super model. Plus she’s giving away two copies of the newly released book: F is for Friendship, A Quilt Alphabet.

How much fun is this? Guest Blogger. I’ve been a quilter since I was 17. I’ve written patterns that are published in books and magazines, lectured, taught, written two books and landed the world’s best job working in a museum with over 700 quilts. But last summer I had a once in a lifetime adventure, I became a super model!

Yes, you might wonder, how can a woman over 50, over weight and under whelmed become a model? It turns out I live in the same area as one Gijsbert van Frankenhuyzen, the excellent illustrator of children’s books for Sleeping Bear Press. I got a phone call one day from Nick (the much easier name he goes by) describing his dilemma. He had a contract to illustrate a children’s book about quilting and was in the middle of researching and painting. He was already working with some of my quilting friends including Carol Schon, who suggested he contact me. Thank you Carol! He phoned, could I help? Sure, I was up for it, I had seen and admired his work and this sounded like great fun.

When we met he showed me some of the text by Helen L. Wilbur and some of the paintings he had already done. He then described some of the letters he still needed to illustrate. His method is to pose models with quilts, take photographs and then paint his illustrations from the photos. This left out almost all of the museum’s quilts, since they can’t be loaned out and draped over just anything.

Lucky for me I have quite a pile of quilts, both new and antique. So I showed him some quilts I thought would work with the text and he took them home and staged his paintings. Some were used with models, and some just on their own. He used both quilts I had made and collected. He would take 3 or 4 quilts at a time, then come back with a few more letters and take back a few more quilts.

At one point he needed a quilter to pose at hand quilting. After the furor over the Northern tissue ads where the Northern Tissue quilters were knitting, not quilting and Northern had to reshoot the commercial and apologize to quilters, I knew the quilting hands better be authentic. He took photos of my hands, so he could show his model (a non-quilter) how to hold the quilt and her hands.

One day he showed me the text for S is for Sewing Machine. The rhyme talks of flying feet which of course means a treadle. About 5 years ago for Christmas my DH surprised me by driving 100 miles to my Aunt Mary Jane’s home and bringing me my grandmother’s old Singer Treadle sewing machine. That was the best Christmas gift I ever got.

I told Nick I had a particularly photogenic Singer. It was a model from about 1910 with beautiful Egyptian scrolls and Sphinx in gold. My grandmother painted the beautiful oak cabinet Nile green, which was the color at the height of fashion in the 1930s. Nick thought the machine was perfect. Then came the big question, would I pose at the machine? My first reaction was NO! But then, I thought, when is this chance ever going to come again? Never of course, so I made Nick promise to give my fine flat hair a little volume and off we went.

I was working on a baby quilt for my next door neighbor and thought the colors could pass for the 1920s, so I put it under the press foot as if I was attaching a border. Nick took a bunch of pictures. I was wearing shorts and a t-shirt and tennis shoes. A few weeks later Nick brought the painting in for me to see. There I was in an old gold dress, corrective black shoes and round glasses. I loved it! It really does look like me and he managed to give my hair just a bit of volume.

By the end of the project my quilts appear in about 10 letters. The book is F is for Friendship, A Quilt Alphabet and it can be purchased on Amazon and many other booksellers online. I bet you can find at your local bookstore, too. 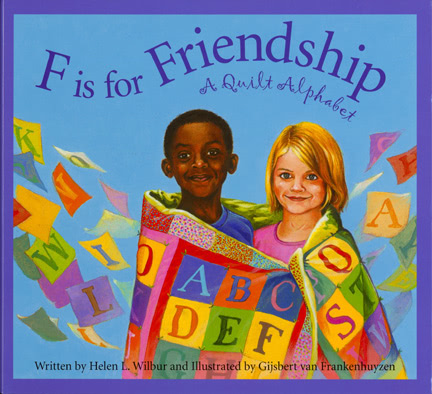 So to share my delight I’m offering two free books. To enter the give-away, leave a comment below. Starting with A is for appliqué, B is for bobbin, C is for… leave a comment that follows the next available letter after the comment above yours. When you make it to the end, start over again.